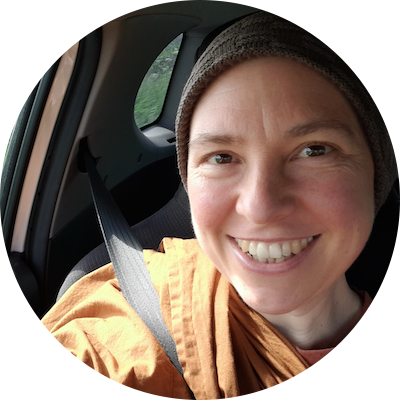 Bhikkhuni Canda was born in Chesterfield, England, in 1975. She came into contact with the Buddha's teachings in India in 1996 at the age of twenty, through the Vipassana tradition as taught by S.N. Goenka. During her first retreat she decided to devote the rest of her life to ending suffering through practising the Buddha's teachings.

For the next seven years she meditated and gave service on numerous retreats, mostly in India and Nepal, as her aspiration to renounce lay-life intensified. However, ordination opportunities for women were so rare that she was unable to find any suitable monastery. Eventually, while undertaking an Ayurvedic Medicine degree in London, she heard about a promising monastery in rural Burma called Thephyu Tawya, and took temporary ordination there with Sayadaw U Pannyajota at the next opportunity. In 2006, after graduating, she returned to ordain for the long-term, and spent the next four years in intensive meditation and service under Sayadaw's guidance. During this time Ven Canda also encountered the Thai Forest Tradition through Ajahn Mahaboowa in Thailand, and became increasingly drawn to samatha practice as a means to develop deeper insight.

By 2010 the ascetic lifestyle, climate and diet in Burma had taken its toll on Ven Canda's health, leading to a return to the West. This happily coincided with the chance discovery of Ajahn Brahm's teachings. His emphasis on love, kindness and letting go resonated so deeply and immediately that learning directly from him became a new goal. After 2 years as a wandering nun in Europe Ven Canda finally had the opportunity to travel to Australia and has been living there since 2012. She joined the Dhammasara community in Perth and took Bhikkhuni ordination in April 2014, with Ayya Santini as preceptor (pictured above to the left of Ajahn Brahm).

In October 2015 Ajahn Brahm asked Ven Canda to take steps towards establishing a monastery in UK, to increase equality in practice and ordination opportunities for women. She is currently practicing wherever support is available, with a view to settling in England when conditions are ripe.

In this episode of Sage Advice, we have Bhikkhuni Candavisuddhi, known as Venerable Canda, the pioneering nun blazing a trail for women monastics by striving to establish the Anukampa project, a monastery for fully ordained …

Blazing a trail for women monastics in the UK - Bhikkhuni Canda

In this episode of Spirit Stories our guest is Venerable Candavisuddhi, also known as Ayya Canda, who first encountered meditation and the spiritual path when travelling through Asia as a young woman. This led to several yea…